Sunday fun with the Hoiberg's

Sunday was a relaxing day and turned out to be a lot fun for everyone. We inflated the new pool/water slide that we picked up for Caitlyn in our friends backyard. This slide was a blast, the kids had a great time and all the adults were sore the next day.

Getting this thing drained, deflated, and dried out turned to be more than I bargained for, but I managed & it was all worth it... needless to say, we will only be setting this up at our house from now on...
You can view the pool water slide pictures by clicking on the pictures below or clicking here. 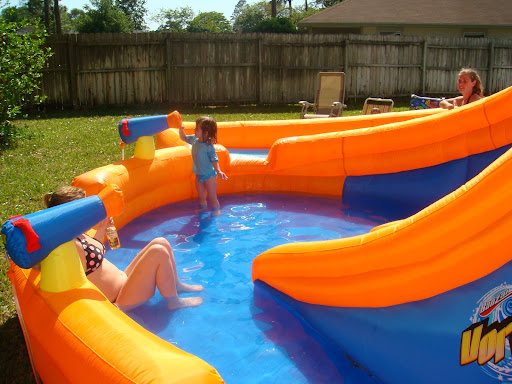 (Caitlyn playing in the pool) 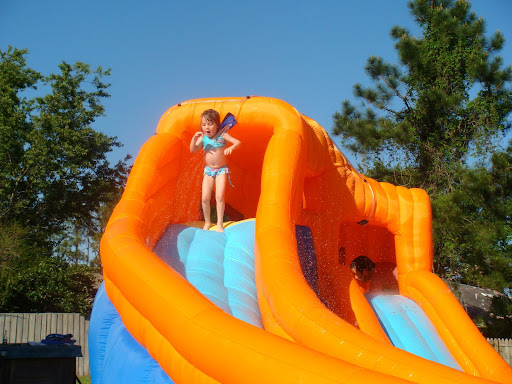 (Laura getting ready to make the plunge)

Posted by Chris Hoiberg at 12:18 AM No comments:

A busy Saturday with the Hoiberg Family

We had a busy Saturday this past weekend & I had the camera with me and took some photos. We started off our Saturday @ PhysioPower doing some Hippotherapy. Caitlyn had another great session on the horse. She was riding Beauty this day while Laura was riding Max. Laura was working on her balance & form. She is doing really well and is actually helping with Max's training. Afterwards we made our way out to Costco to pickup some necessities as well as the Pool Waterslide and then we made our way out to Jax Beach and had a late lunch @ Joe's Crab Shack.

You can view the Hippotherapy pictures by clicking on the pictures below or clicking here. 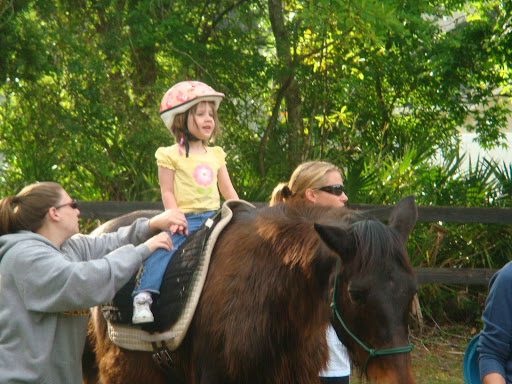 (Caitlyn riding Beauty with her therapist) 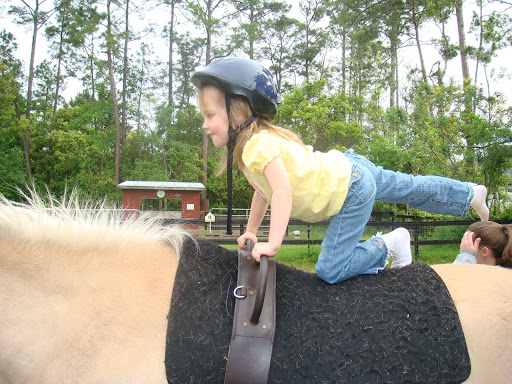 You can view the Pictures from Joe's Crab Shack by clicking on the pictures below or clicking here. 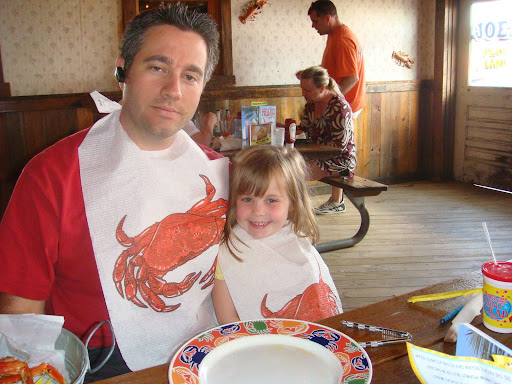 (Daddy & Laura getting ready to eat some crab @ Joe's)
Posted by Chris Hoiberg at 11:55 PM No comments:

Day 5 of our Cruise to Cozumel

Day 5 of the cruise brought us back into Port Everglades around 8:00am. With all the kids, we were in no rush to make it off the ship first. We took our time and had a nice breakfast and let the kids burn off some energy on the Helipad at the front of the ship before getting in the cars for the trip home. We made a couple stops for lunch and a pre-dinner snack. But other than that is was a long drive home at the end of a wonderful family vacation. 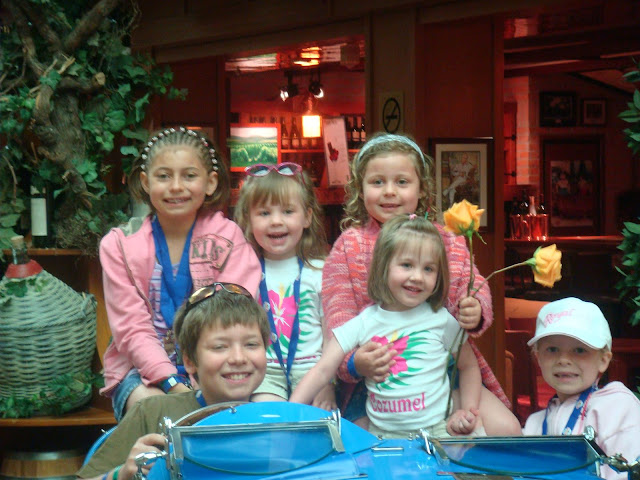 (All the kids in the car on the Royale Promenade before leaving the ship)
Posted by Chris Hoiberg at 6:50 PM No comments:

Day 4 of our Cruise to Cozumel

Day 4 was another day at sea on our return home from Cozumel. It was another relaxing day that started off with a nice breakfast, which we then went back to the room and changed to go ice skating on the deck 3 of the ship before heading back up to the pool deck for lunch at Johnny Rockets. After lunch the kids went swimming & Caitlyn made a new friend in the pool. Afterwards we took the kids to dinner and then on to Adventure Ocean. At that point the parents went back to Chops Grille for their dinner. 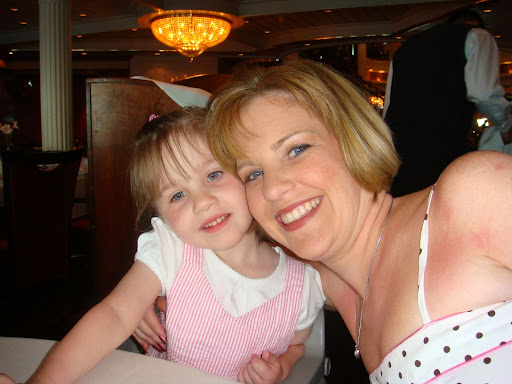 (From left to right: Sarah & Caitlyn at dinner)
Posted by Chris Hoiberg at 6:38 PM No comments:

Day 3 of our Cruise to Cozumel

We arrived in Cozumel on Day 3 around 8:00am. We went to a beach resort, Playa Mia, down the road from the dock that we visited the last time we were in Cozumel. The girls all had a hair wrap and played in the pool most of the time. It was an overcast day, but beautiful and not terribly hot. afterwards we made it back to the ship and girls took a short nap while Sarah & I headed up to play some miniature golf before the ship left port. We then took the kids to dinner before dropping Laura off at Adventure Ocean. Kate brought Caitlyn back to the cabin to go to bed and then the parents went up to Chops Grille for dinner. 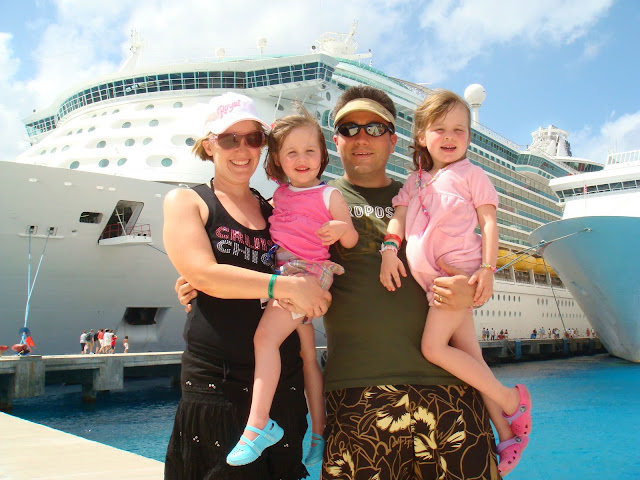 (From left to right: Sarah, Caitlyn, Chris & Laura in front of Navigator of the Sea on the dock in Cozumel, Mexico)
Posted by Chris Hoiberg at 6:21 PM No comments:

Day 2 of our Cruise to Cozumel

We were at sea all day on Friday slowly making our way to Cozumel. This left us with some quality time for everyone to just relax and enjoy being on the ship. We had a nice breakfast in the morning and then made out way to the cruise deck for an afternoon of swimming. This was also formal night on the cruise. 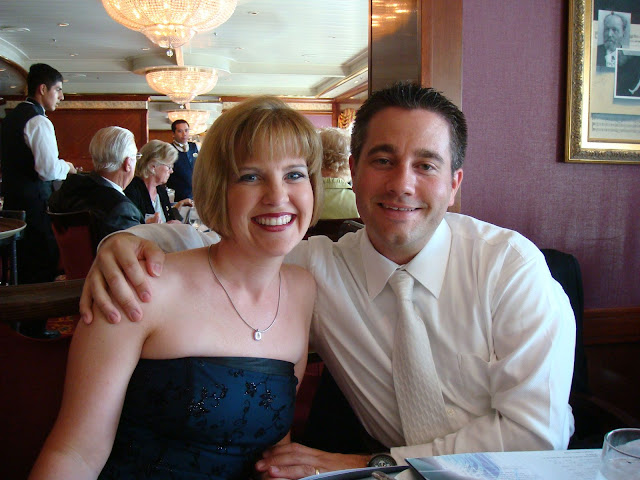 (From left to right: Sarah & Chris on Formal Night)
Posted by Chris Hoiberg at 6:12 PM No comments:

Day 1 of our Cruise to Cozumel

We left Port Everglades on Royal Caribbean's Navigator of the Seas Thursday evening around 5:00pm. We made it to the ship in plenty of time to get situated in our cabins and then get the kids registered in Adventure Ocean. We even had some time to do a bit of swimming. It wasn't long after that before it was time for dinner though. We brought Kate with us on this trip as Caitlyn's attendant caretaker. Kate is Caitlyn's ABA Therapist\Teacher. She did such a wonderful job of working with Caitlyn on this trip, we could not have done it without her. Thank you Kate! 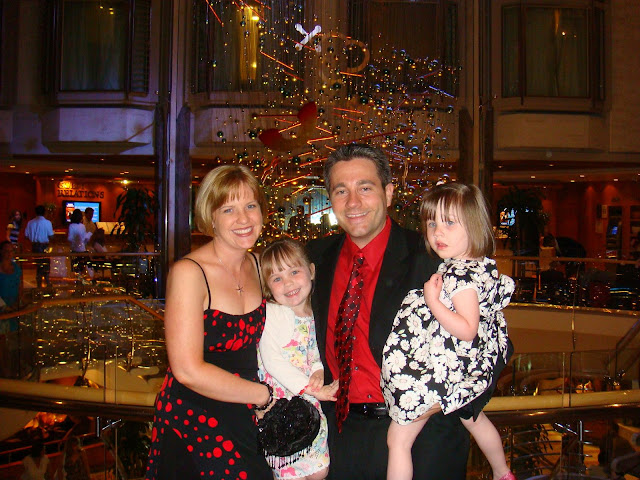 (From left to right: Sarah, Laura, Chris, & Caitlyn on the way to dinner)
Posted by Chris Hoiberg at 6:00 PM No comments:

We just returned from our family cruise to Cozumel aboard Royal Caribbean's Navigator of the Seas. This was Laura & Caitlyn's first cruise and they had a blast. We went with our close friends the D'Amico's and their 4 children. Caitlyn's Attendant Caretaker, Kate (who is also Caitlyn’s Therapist\Teacher) was also with us. We could not have done this cruise with Caitlyn without Kate's help.

I have pictures from the entire cruise. Once I finish sorting through them all I will have them posted. (Pulling into Port Everglades in Ft. Lauderdale w/ the Navigator of the Seas in the background)

Posted by Chris Hoiberg at 1:53 PM No comments:

Take the Crap Out

Chris Hoiberg
Jacksonville, Florida, United States
Happily married to my beautiful wife, Sarah, of 10+ years, we are the proud parents of two beautiful girls. Our youngest daughter, Caitlyn, was Vaccine Injured at 18 months of age by the DTaP Vaccine. Chris is a Systems Administrator with an Environmental Engineering Firm & also has owns his own business, InterLynk Systems, which specializes in Small Office / Home Office Networks as well as Computer Services & Sales. Sarah is a Homemaker & also helps her mother out in her business, Laura Cate Creations.

Do you believe Childhood Vaccine's can cause injuries?